The Concept of sustainable aviation development has become so widespread that every development today must take into account its effects on the environment. It was the report by the World Commission on environment and development(WCED) in 1987,” Our common future” which challenged the international bodies, to give the idea dominance. Environmental problems came into focus in the 1960s and 1970s. developmental concerns had come to prominence in the 1940s and 1950s.’Our common future in 1987 made the two concepts of development and environment to be combined.

Sustainable development is a field that tries to look for answers to improve the impact of air transport on society and the environment. It tries to reduce the contribution of aviation to climate change through innovation and new behavioral practices. These practices include new designs, new propulsion systems, green technologies, and energy-optimized methods of operation to minimize energy wastage, noise, and emissions. The research includes system-level analysis of advanced aircraft, electric and hydrogen-powered aircraft, renewable energy, sustainable fuels, and improved air traffic management.

Sustainable aviation fuel produced from renewable methanol can play an important part in helping the aviation industry transit to a net- Zero industry in the future. Achieving this goal by 2050 will require efforts from many fronts including a serious increase in SAF supply. and new aircraft designs. Methanol is produced from the.  gasification of biogas and waste material and also from low carbon-hydrogen, and co2 which is captured can be used for the production of SAF. Early estimates by Exxon-Mobil show that this solution has a bigger yield of jet fuel than other options.

This is not about building up a future airline or a part of advanced air mobility. The goal is to make sustainable aviation and reduce its impact on climate change, reduce greenhouse gas emissions. To achieve this, you must reduce fuel burn it must be lightweight and possibly use electricity to assist propulsion. 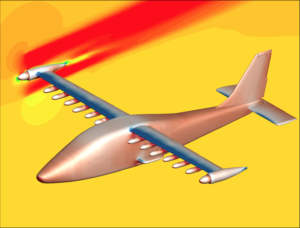 This aircraft is being produced by modifying a baseline Italian aircraft the Tecnam  P2006T, The X-57, is a P -2006T with an electric propulsion system. The X-57 will be powered by lithium-ion batteries. 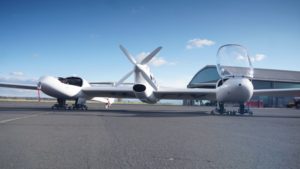 The problem with electric aircraft is that they rely on batteries. If a Jumbo jet was to use these batteries today, it would require thousands of kilos of batteries to replace the jet engine used today. As a cure to this problem, the Hybrid hydrogen-electric propulsion system will cure this weight problem. Hydrogen is the most abundant element in the atmosphere. It is a major component of all living matter. In spite of its abundance, it rarely appears naturally. It is always combined with other elements. It can however be generated from natural gas or splitting water by use of electricity. This will enhance sustainable aviation.

When hydrogen is produced as an element, energy is released by reacting with oxygen to form water. In a fuel cell, you have the hydrogen converted directly to electricity. Very low losses and high efficiency. You can therefore see that hydrogen can be used to store and produce energy to enhance sustainable aviation.

The HY4 is a hydrogen-powered aircraft that uses this technology to power its flight. It is a silent and environmentally friendly aircraft. The HY4 is a four-seater aircraft. A hydrogen fuel cell aircraft contains a tank that supplies a fuel cell with high-pressure hydrogen. that mixes with oxygen. This mixture will produce a chemical reaction that will produce electricity to power the motor  and promote sustainable aviation

Sustainable aviation is the way to go in energy production and use. The problems associated with sustainability are no longer hidden from man. Most of the problems associated with worsening environmental issues are related to sustainability. Global warming, rising ocean levels, vanishing islands,, floods and wildfires. All these and many more can be laid on the doorstep of unsustainable energy uses. Therefore in order to make the world a better place for everybody, we all have to make sustainable aviation the in-thing.