The evolution of the aircraft engine has been grueling, yet fulfilling. The Wright brothers made their first powered flight in 1903 using the Wright flier, They also had to make their own propellers. The flight lasted 59 seconds and marked the start of the long road in aviation, There has been no looking back since then. As new demands arise so do people rise to the occasion to satisfy that demand. 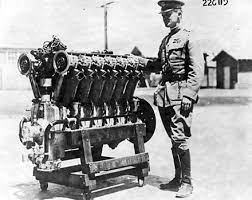 The Wright Brothers used the first-ever aircraft engine which was powered by a simple inline four-cylinder gasoline engine. It produced 12 horsepower, which is about the power of a lawn mower. In 1943 the Merlin engine powered the American fighter Mustang with 150 horsepower and allowed the aircraft to soar to 10000ft

In  1917 with the breakout of the first world war, It was proposed that a standardized Army aircraft engine be used. For all army aircraft. It was proposed that it be Packards 905 design. It was however decided that an engine combining the Packard V12 (905) and Hall Scott (V12 A-8)was to be the army’s new standard. Aircraft engine. The name Liberty was crafted for this aircraft. The first aircraft using this engine was flown in august 2017 setting a new American altitude record.

This engine was a V8 configuration. It produced 250 hp. one of the unique features of the Liberty was its configurations of 4,6,8, and 12 cylinders. the V12 produced 421hp. The Liberty engines were installed on De Havilland DH-4 and Curtiss JN-4. After the first world war,[ublic awareness had increased and government officials began to know the possibilities that lay dormant in the aircraft.