1. For both ground and flight, I made sure I had a decent meal and or snack in between and stayed hydrated. This is a day-long exam, if you consider your travel times in the car and in the air, you are looking at 9-10 hours of being active as it was in my case. 5 of those hours is your actual exam. Make sure you EAT. You will be completely drained if you don’t. Do not let the lack of food in your system mess you up after you’ve worked so hard to prepare.

3. Make use of the checklist from preflight until the end of the flight.

4. Talk through everything you are doing in the cockpit. Try as much as possible to be vocal about your intentions. If you pull the power back, say so; “just gonna reduce power a bit here”.

5. Remember that you are pilot in command through the entire flight portion. Except when your examiner asks for control of the airplane, it’s your airplane.

Here are 2 examples of being PIC during my flight:

First Scenario: Initially in the practice area, it was very bumpy closer to the mountains and we had to look for smoother areas to do the maneuvers. While we were being tossed around, I assumed he was looking at how I handled and managed the situation. So keep that in mind in the case of unforeseen conditions that could affect your flight.

Second Scenario: When we were coming back to do some landings, we were on the north side of the runway, right downwind of runway 26. When I called in to land. Tower clearly told me to make a right base entry for runway 6. But when we turned base at runway 26 he went: well we’re pretty high, why don’t you slip it down to get closer. We were at about 3800ft and needed to get down to 2000ft. Well I slipped the airplane down to about 2500ft and then I let him know that we were actually instructed for runway 6 not runway 26. And that I was flying a right base for runway 6.

In that moment, he sounded very genuine. But when I think about it now, that could have been part of his test to distract and see what I would do as pilot in command. If I actually setup and landed on runway 26, that would have been a fail. So very important to know that you are PIC and you have the final authority.

Overall, My examiner Ernie was genuinely cool and calm from the moment we shook hands. As long as you are prepared and find a way to stay relaxed, the entire exam should go fairly easy. 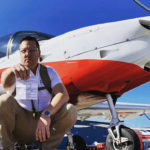 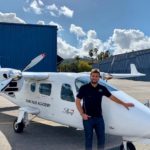